At the Bathroom Sink, Razors Face Off 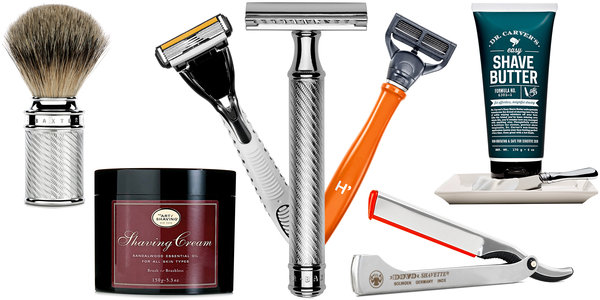 The return of facial hair, whether in the form of artful scruff or hipster beard, has been a major trend in men’s grooming over the last decade. But it can’t last forever; at least, that is what the founders of several up-and-coming razor companies hope.

“Guys are embracing the fact that the bathroom is the original man cave,” said Michael Dubin, 35, a founder of Dollar Shave Club in Venice, Calif. “It’s where you see yourself naked; you evaluate your progress; you prepare yourself for battle every day.”

In 2011, when Mr. Dubin and Marc Levine founded their company, a direct-to-consumer e-commerce site with razors delivered monthly at a low cost, the industry was dominated by the likes of Gillette and Schick, “the big boys playing their big-boy game,” Mr. Dubin said.

But “guys don’t like to get ripped off,” he said, referring to drugstore prices, which he said were excessively inflated.

In March 2012 Dollar Shave Club introduced a subscription service costing $1, $6 or $9 a month, depending on the razor selected, advertised with a funny YouTube video that went viral. Today, the company has more than 300,000 members, Mr. Dubin said.

He envisions a wider counter for men’s toiletries, and already offers a shave butter and moist towelettes that are meant to replace toilet paper.

Last March, Harry’s, another subscription razor service with a “Mad Men” aesthetic (its razors have names like Winston and Truman), began out of New York, charging about $2 a cartridge, with handles from $10 to $20. Its founders, Andy Katz-Mayfield and Jeff Raider, want to appeal to a worldly man who is “modern, sophisticated and considered,” said Mr. Raider, one of the four founders of Warby Parker, the online eyeglass company.

“Sure, there’s a market for that super low-cost, Dollar Shave Club guy,” Mr. Raider said. “But our customer cares about quality and craftsmanship.”

Mr. Raider has visibly borrowed from his Warby Parker experience. Both companies make charity donations with each purchase, and both mine American nostalgia, with elaborate back stories for many of the items sold on their Web sites.

“Guys really like to know the providence of their product,” Mr. Raider said. “It gives them confidence that they’re using a product that would work.”

Jean-Pierre Mastey, who has been in the men’s grooming business since 2000, has seen several companies in the field spark and sputter. As the creative director of Baxter of California, a 48-year-old grooming products company, he seems less concerned than curious about his new competition.

“Their timing is spot on and they’re both doing it right,” said Mr. Mastey, who bought the company from its founder, Baxter Finley, who was also his neighbor. Now owned by L’Oréal, the company offers blue steel straight razors, beard combs and shave creams with zingy peppermint oil.

“There’s acceptance now for going against the grain,” he said. “It took 10 years for guys to be up to that comfort level. Now they’re actively looking for options.”

Instead of showing up on the shelves at beauty emporiums like Sephora, Baxter of California products are sold through men’s wear shops like Saturdays Surf and Freemans Sporting Club. In 2010, the company opened a barbershop in Los Angeles called Baxter Finley, where the barbers also test products and provide feedback. Likewise, Harry’s is to open a barber shop on Tuesday at 64 Macdougal Street (Houston Street) in SoHo

“Once you get men to change, they are much more loyal than the female customer,” Mr. Mastey said. “They’re not looking for the flavor of the month or the new active ingredient talked about in InStyle.”
He plans to roll out more Baxter Finley barbershops and expand his product line.

“The shaving market is big and very lucrative,” he said. “It’s a billion-dollar business with half the world your potential.”

And like a large corporate record label buying a small independent one, the “big boys” of that business are not letting the trend for heritage razors pass them by. Procter & Gamble, which owns Gillette and Braun, bought the Art of Shaving in 2009 and has expanded the brand, taking it to 122 stores nationwide. It has introduced horn handles topped with Mach3 razor cartridges, safety razors inspired by Gillette models from 1901 and straight razors such as one intimidating 5/8-inch wide handmade blade set in an African grenadille wood handle. Sweeney Todd would have loved it.
The Gillette Mach3 razors certainly enjoy broad brand recognition, said Kumi Craig, a celebrity groomer for stars like Bradley Cooper and Chris Pine and the first groomer expert for La Mer.

“Guys like a bit of familiarity, and almost everyone knows the Mach3,” she said, which puts her in a better position with clients.

Ms. Craig buys her Mach3 cartridges from Amazon.com and clicks them into a weighty $300 palladium handle she found at MiN New York. She admires the simple elegance of safety razors, but they are more prone to cut or nick, which is unacceptable for important events, she said.

In her kit, she also totes a trimmer and a Norelco electric shaver. And she stocks up on English shaving creams, like those from Taylor of Old Bond Street.

“These are all luxuries men appreciate, but I don’t know if they’ll actually go out and buy it,” she said.
Instead, Ms. Craig will give these items to her clients as gifts.

“Then you’re not going to give them a cheap subscription razor,” she said. “Men really do take advice. So you want to give them something good.”